Built by Elector Friederich III in 1699 as a summer palace for his wife Sophie Charlotte, this regal estate, the largest palace in Berlin, is framed by a baroque-style garden. Inside, a collection of 18th century French paintings is the largest of its kind outside France. Visitors can see the Old Palace, with its baroque rooms, royal apartments, Chinese and Japanese porcelain collections and silverware chambers, as well as the New Wing, with its rococo splendor and fine furniture, added by Friederich the Great.

The complex was enlarged several times, adding a domed tower crowned with a statue of the goddess of happiness Fortuna, several wings, the Orangeries, the annex, and the Belvedere Teahouse, now a porcelain museum. Also worth noting is the mausoleum of Queen Louise, and the Schinkel pavilion, built as a summerhouse for King Friedrich Wilhelm II.

The palace was severely damaged in World War II, and rebuilt starting in the 1950’s. Charlottenburg Palace’s former theatre is now home to the Museum for Pre- and Early History, which boasts items from the famous Troy excavations carried out by Heinrich Schliemann in the 1800’s. Tickets for each section are sold separately; gardens are open to the public for no charge; admission to the New Wing includes an audio guide.

Next door to the palace, the Kleine Orangerie restaurant has a sunny atrium and outdoor seating for pleasant weather, and provides a peaceful place to dine, enjoy high tea, or relax with an ice cream. Its larger sister building, the Grosse Orangerie, hosts classical music concerts from April to October; highlights from the 17th and 18th century are performed by an orchestra in baroque costume.

Charlottenburg Palace on the map of Berlin 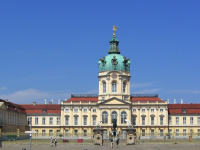 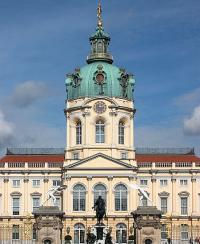 Please login to give your opinion about Charlottenburg Palace.