Kinkakuji (Golden Pavilion) is a Zen temple in northern Kyoto whose top two floors are completely covered in gold leaf. Formally known as Rokuonji, the temple was the retirement villa of the shogun Ashikaga Yoshimitsu, and according to his will it became a Zen temple of the Rinzai sect after his death in 1408. Kinkakuji was the inspiration for the similarly named Ginkakuji (Silver Pavilion), built by Yoshimitsu's grandson, Ashikaga Yoshimasa, on the other side of the city a few decades later.

Kinkakuji is an impressive structure built overlooking a large pond, and is the only building left of Yoshimitsu's former retirement complex. It has burned down numerous times throughout its history including twice during the Onin War, a civil war that destroyed much of Kyoto; and once again more recently in 1950 when it was set on fire by a fanatic monk. The present structure was rebuilt in 1955.

The interior of the first floor of the Golden Pavilion

Each floor has a different architectural style

Kinkakuji was built to echo the extravagant Kitayama culture that developed in the wealthy aristocratic circles of Kyoto during Yoshimitsu's times. Each floor represents a different style of architecture.

The first floor is built in the Shinden style used for palace buildings during the Heian Period, and with its natural wood pillars and white plaster walls contrasts yet complements the gilded upper stories of the pavilion. Statues of the Shaka Buddha (historical Buddha) and Yoshimitsu are stored in the first floor. Although it is not possible to enter the pavilion, the statues can be viewed from across the pond if you look closely, as the front windows of the first floor are usually kept open.

The second floor is built in the Bukke style used in samurai residences, and has its exterior completely covered in gold leaf. Inside is a seated Kannon Bodhisattva surrounded by statues of the Four Heavenly Kings; however, the statues are not shown to the public. Finally, the third and uppermost floor is built in the style of a Chinese Zen Hall, is gilded inside and out, and is capped with a golden phoenix.

After viewing Kinkakuji from across the pond, visitors pass by the head priest's former living quarters (hojo) which are known for their painted sliding doors (fusuma), but are not open to the public. The path once again passes by Kinkakuji from behind then leads through the temple's gardens which have retained their original design from Yoshimitsu's days. The gardens hold a few other spots of interest including Anmintaku Pond that is said to never dry up, and statues that people throw coins at for luck.

Continuing through the garden takes you to the Sekkatei Teahouse, added to Kinkakuji during the Edo Period, before you exit the paid temple area. Outside the exit are souvenir shops, a small tea garden where you can have matcha tea and sweets (500 yen) and Fudo Hall, a small temple hall which houses a statue of Fudo Myoo, one of the Five Wisdom Kings and protector of Buddhism. The statue is said to be carved by Kobo Daishi, one of the most important figures in Japanese religious history.

Kinkaku-ji on the map of Kyoto 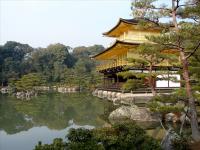 Please login to give your opinion about Kinkaku-ji.