The Château de la Hunaudaye was built 800 years ago on an ancient Gallo-roman site. It is now isolated in the middle of the country in an old marsh on the edge of a forest. At first glance, this surprising location amidst this profoundly redesigned landscape is hard to understand.

Olivier Tournemine built the Château de la Hunaudaye in 1220. It shelters river Arguenon that runs 2 kilometres away. This river forms the border between the Pays de Lamballe called le Penthièvre at the time, and the Poudouvre, which corresponds to the Pays de Dinan.

The rebuilding of La Hunaudaye castle lasted all of the 15 th century, in various stages. Three new towers and some new curtains were added on to the initial structure.
Few changes were made after that. Only a pompous flight of stairs of the Renaissance style was built at the end of the 16th century.
During the French Revolution, inhabitants of Lamballe set the castle on fire. Drawbridges, wooden floors and roofs then vanished.

In the 19 th century, the castle was used as a quarry. Part of the castle having collapsed, the State decided to protect it by listing it as Historical Monument in 1922 and purchased in 1930 from the marquis de Bellevue. Since 1975, the « association du château de la Hunaudaye » has been managing the site and has opened it to visitors. Today, the association and the Ministry of Culture are working together on a design project. 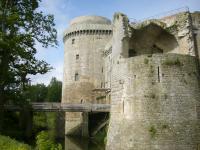 Please login to give your opinion about Chateau de la Hunaudaye.